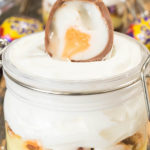 3 Cups Chocolate Cake (I made this box mix)

3 Cadbury Eggs, sliced in half (for topping)

Use the milk and pudding mix to make up a batch of vanilla pudding according to instructions on the box.

Divide the chocolate cake evenly among the bottom of six jars. Add a layer of vanilla pudding that is about the same size as your chocolate cake layer to each jar.

Take the chopped Cadbury Eggs and add a single layer of them on top of the pudding in each jar.

Fill the jar the rest of the way with Cool Whip. Add a Cadbury Egg that has been sliced in half to the top for garnish.

Serve immediately or store in the refrigerator until ready to consume.